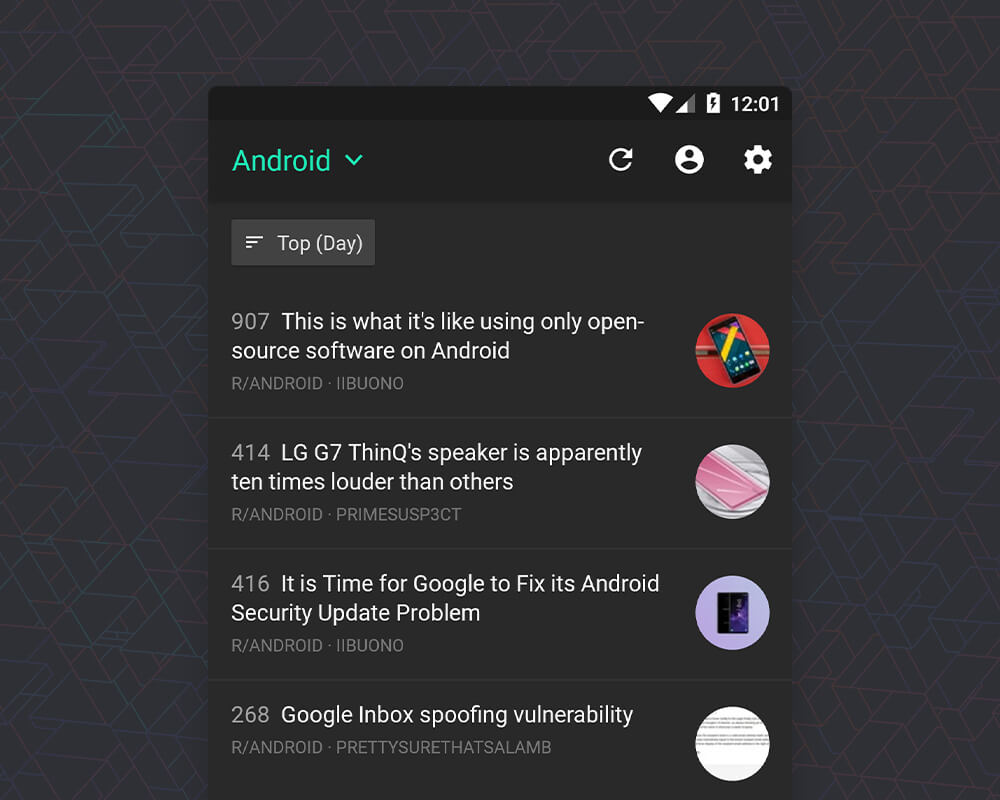 After spending more than a year, I’m happy to announce that my Reddit app — Dank is finally ready for the world to see. You’re going to love it. It’s a fresh experience for Reddit on Android.

The first thing you’re going to notice is that Dank puts the focus on user generated content. The UI takes a back-seat so that you can enjoy photos posted by Reddit’s lovely users in their full glory. 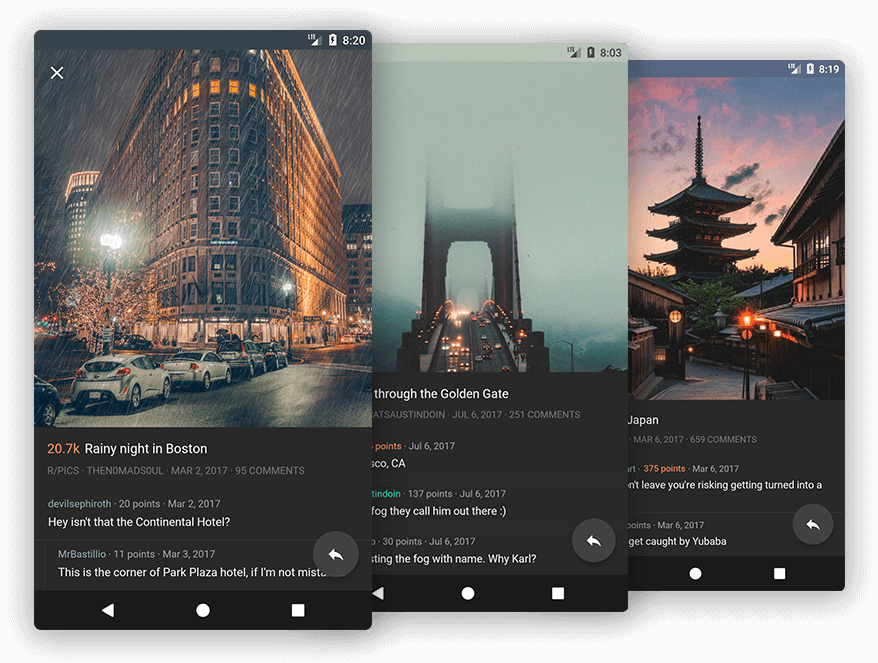 My favorite part of Dank is that it’s driven by gestures. Unlike taps, gestures enable faster navigation, are easier to build muscle memories for (because of their larger surface areas) and most important of all — they are downright enjoyable. If you’ve used Apollo or narwhal for iOS, you know what I’m talking about. Dank does all of that, plus more. 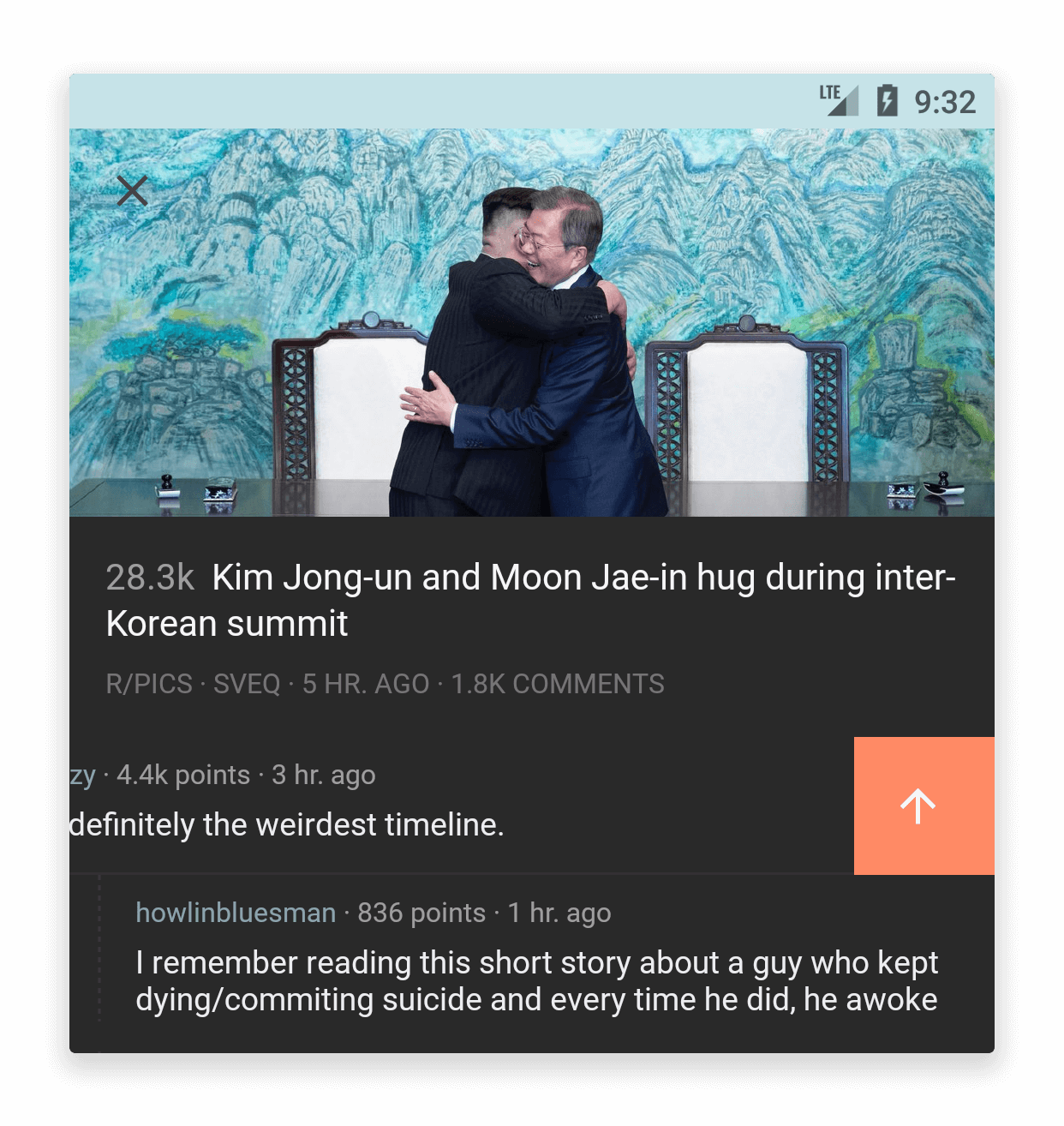 Submissions and comments can be swiped towards the left to upvote and downvote. Swiping them towards the right will let you reply or reveal options.

Every screen in Dank expands from where you tap to reveal the content behind. Dragging them vertically let’s you collapse them to go back. The inspiration behind this gesture was Google Inbox. 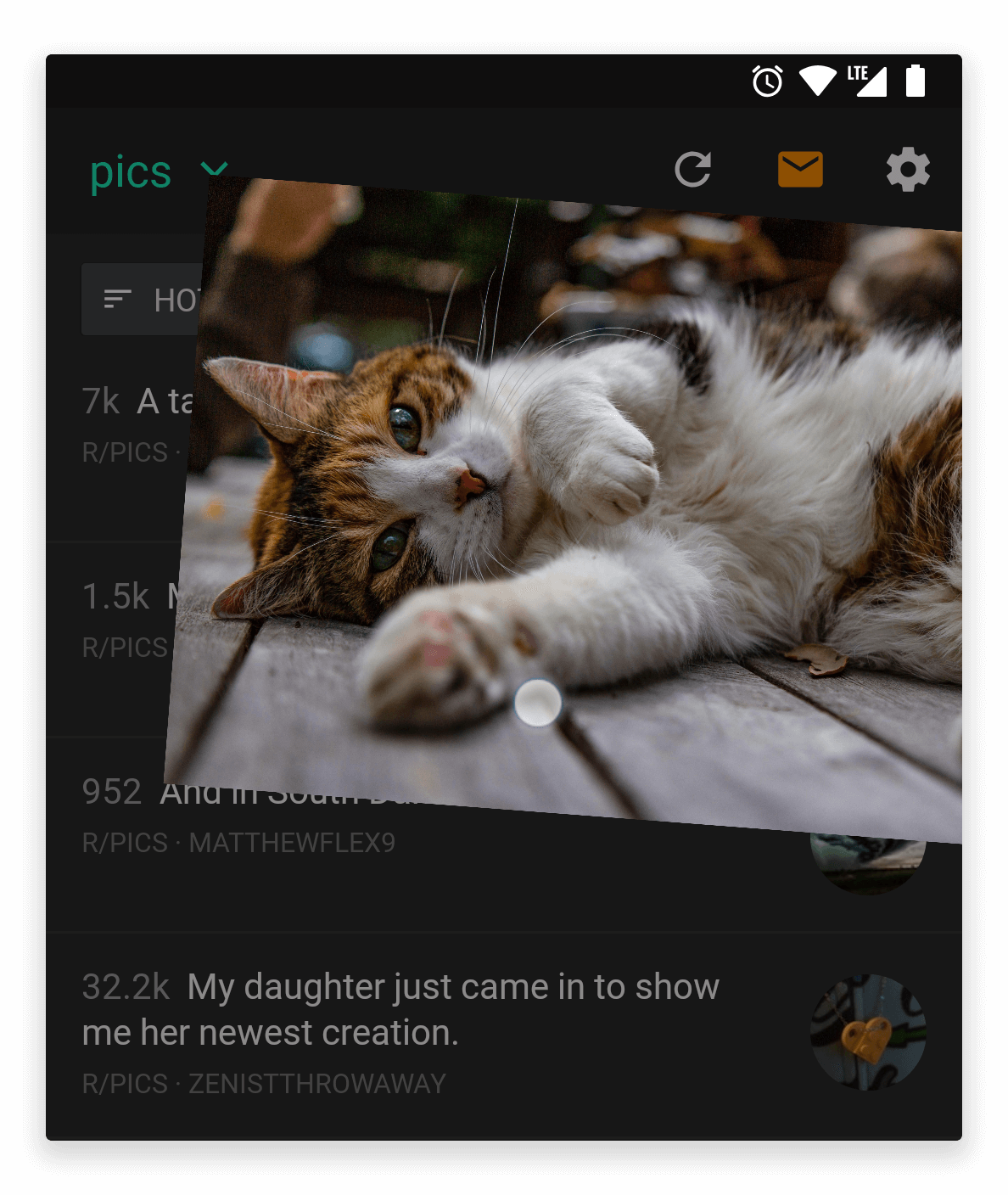 Images and videos can be dismissed by flicking them out of the box. The gesture feels natural because the images rotate in the direction of the finger. This gesture works even when the images are zoomed in. 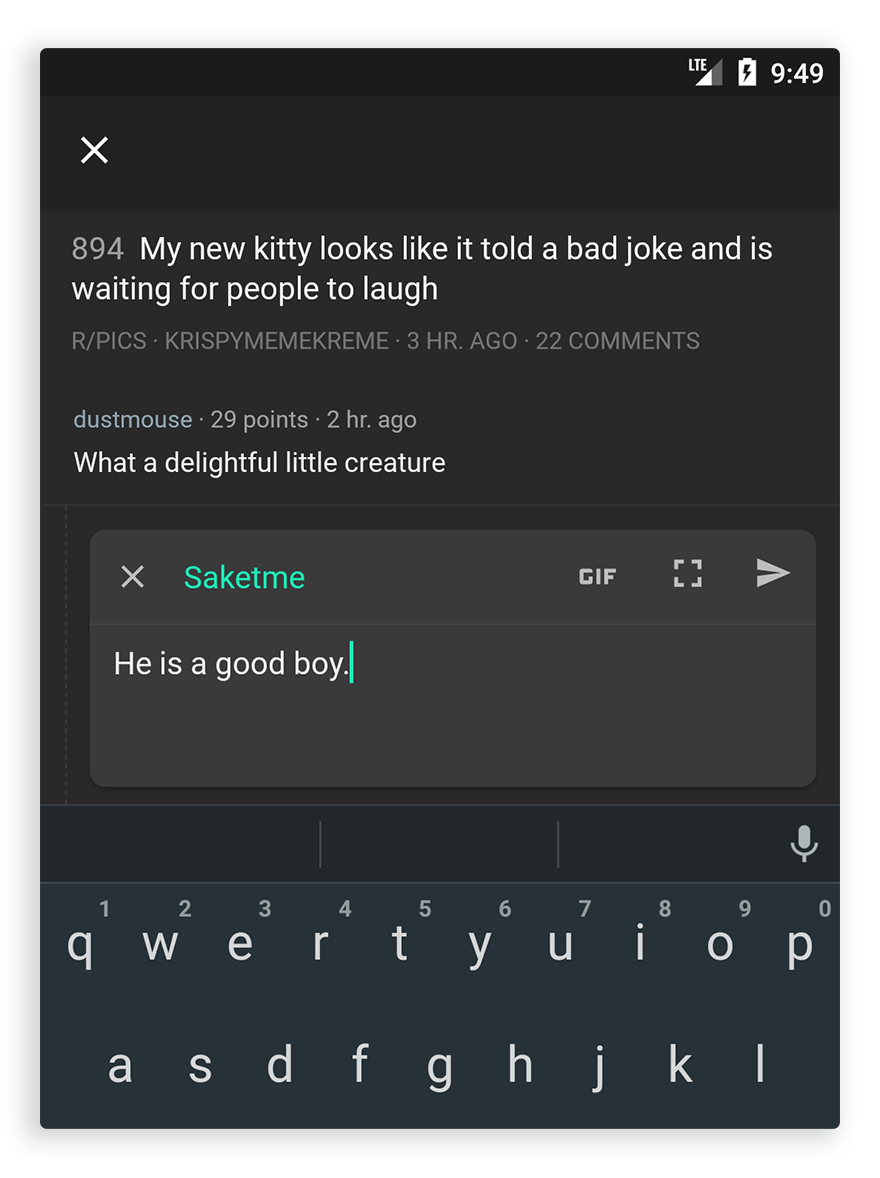 Let’s face it — typing on a 5-inch display sucks. Dank understands this and promotes inline replies instead so that you can respond faster without losing context. Fullscreen is optional if you need a distraction free writing experience. 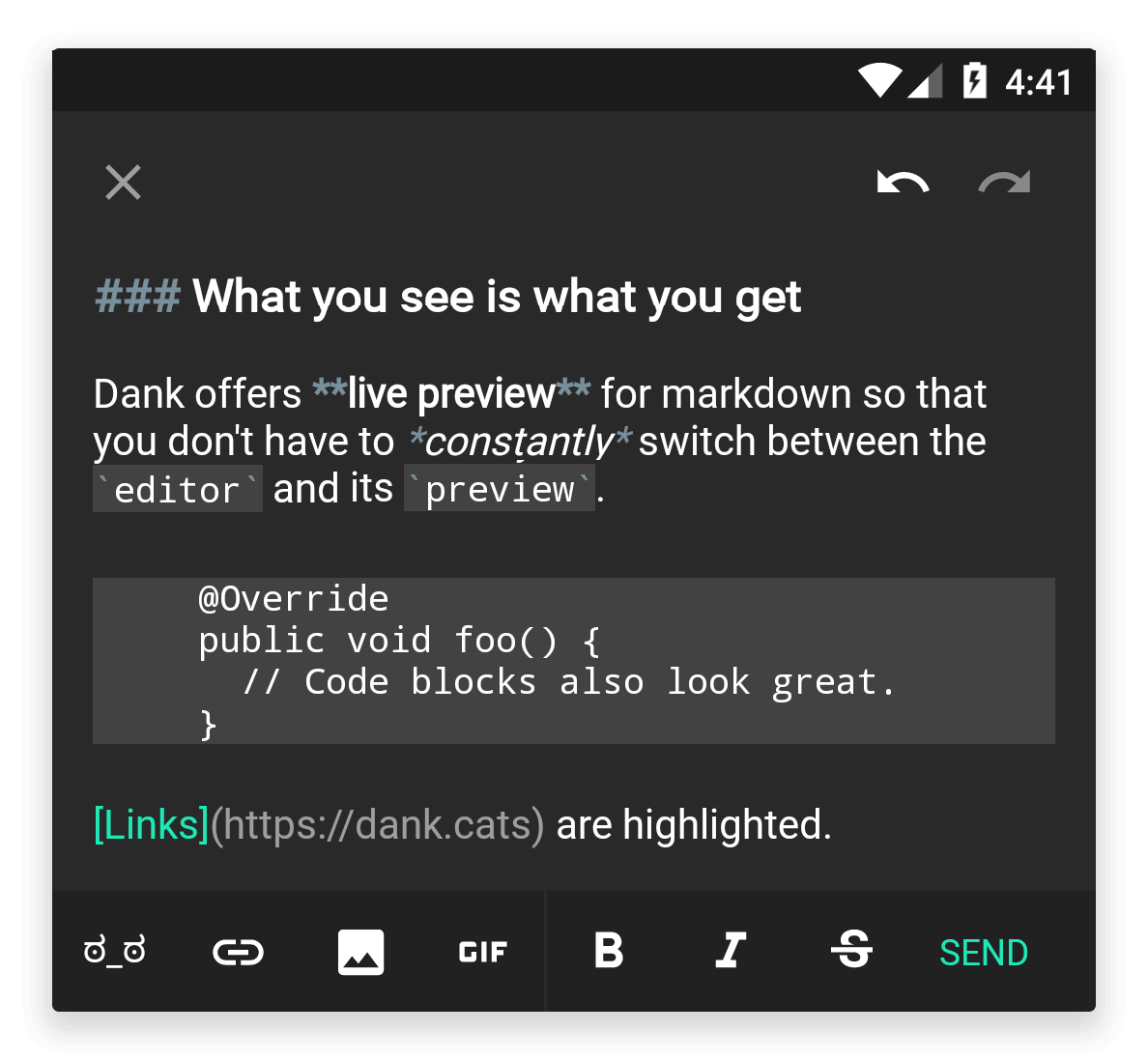 What you see is what you get — a live preview for markdown so that you don’t have to constantly switch between the editor and its preview.

If typing didn’t already suck enough on phones, undoing mistakes is even worse. But Dank is very forgiving. You can make mistakes and Dank will let you undo (and redo) your typed words. 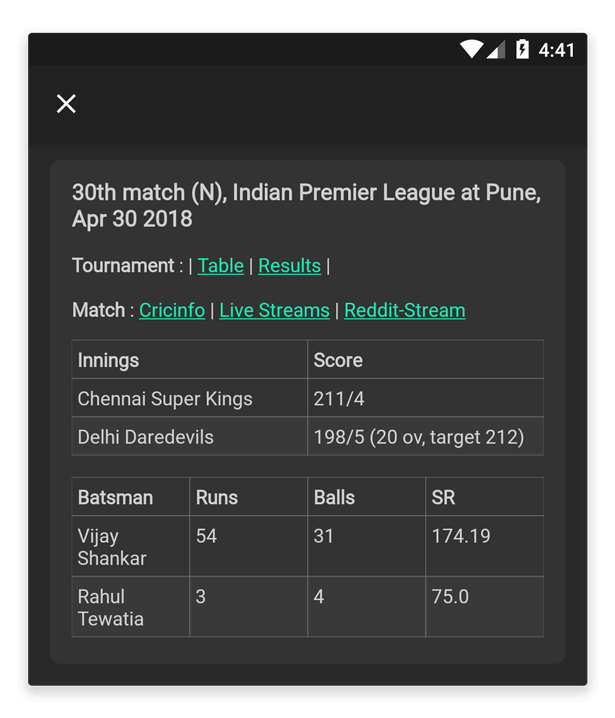 GIFs speak a million words and are perfect for Reddit. It’s so surprising other apps haven’t added support for GIFs yet. 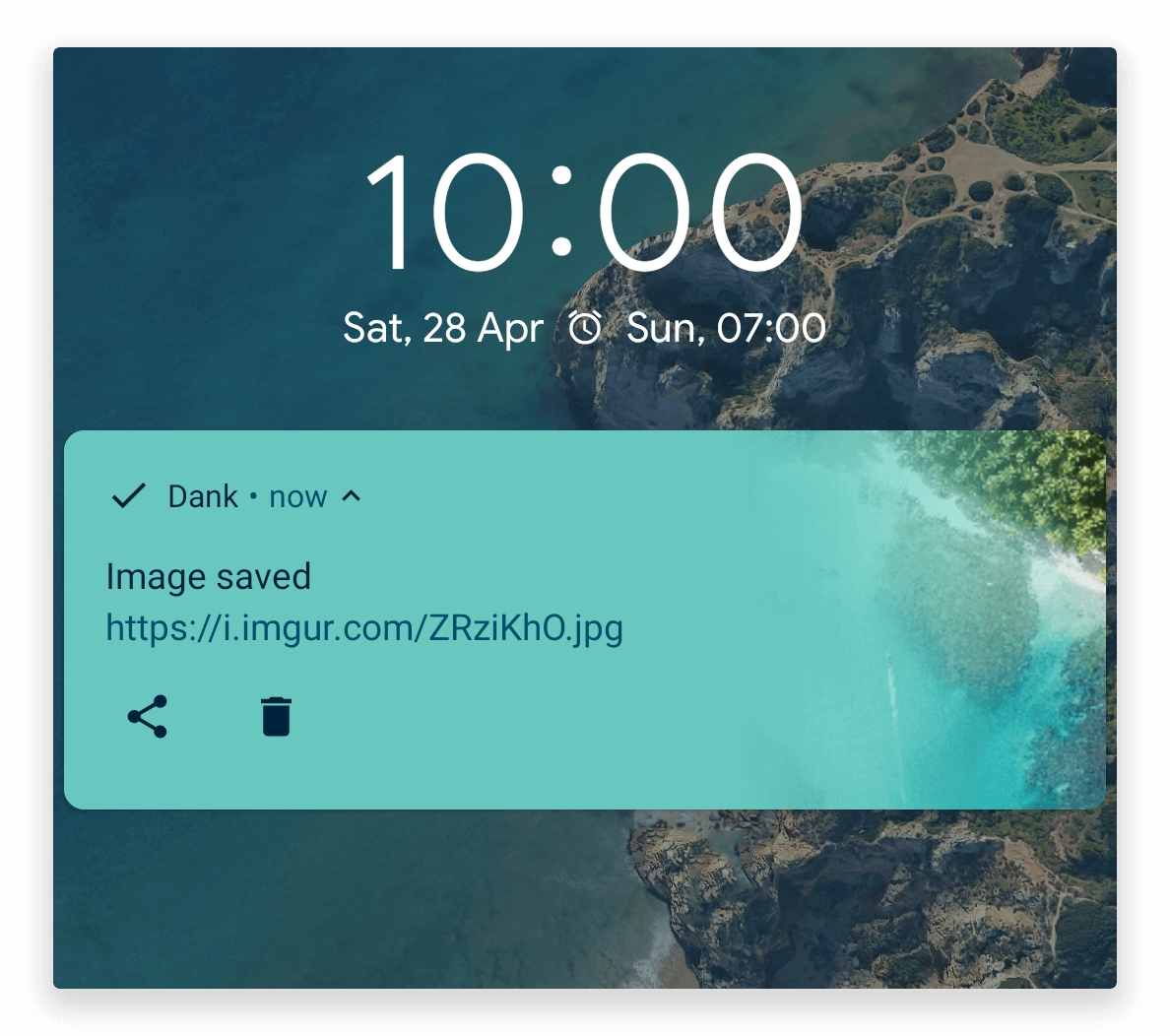 Starting with Android Oreo, apps can request the system to tint notifications to match their content image. And they look beautiful. Dank takes advantage of this feature to show colored notifications when you download images and videos. 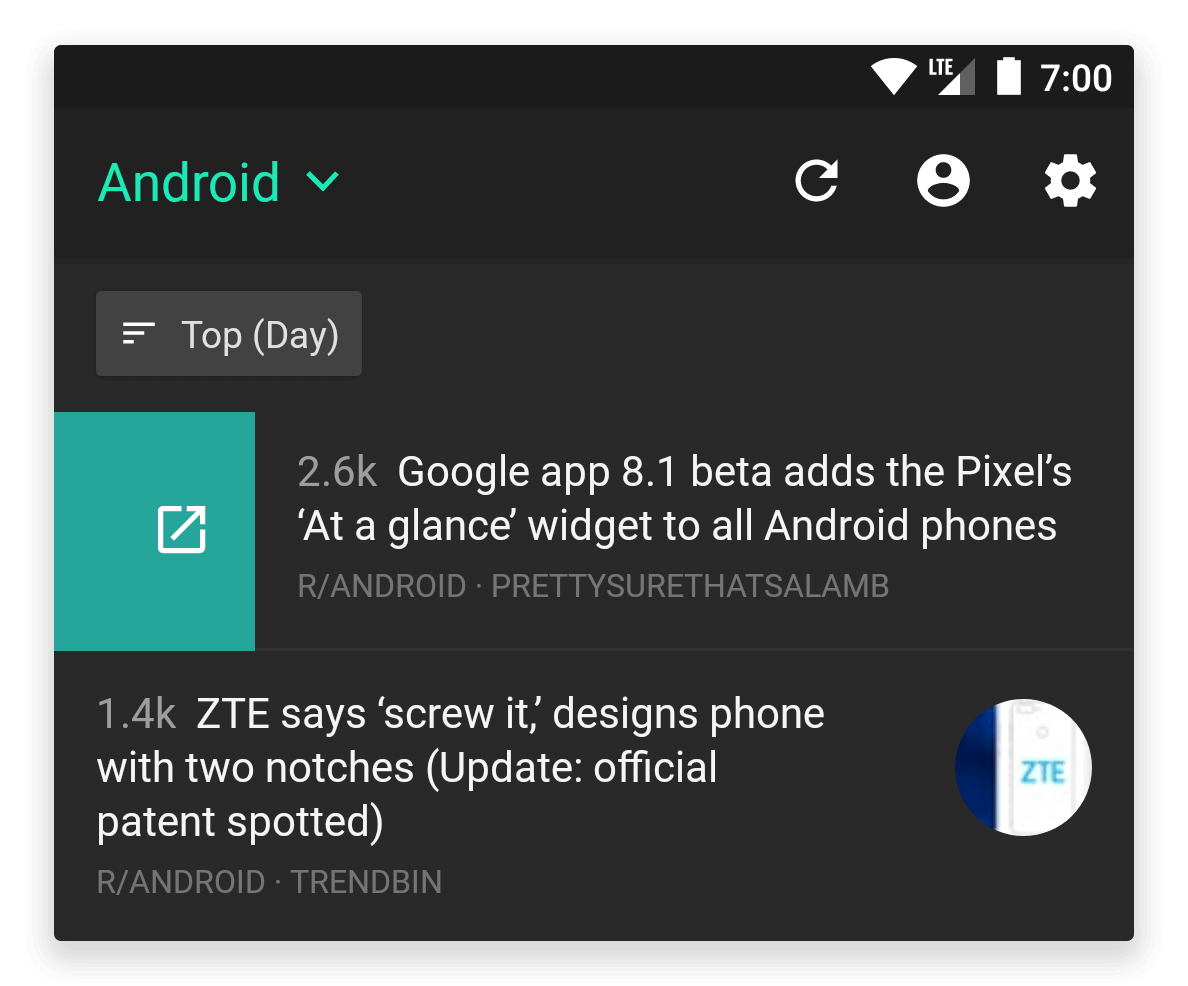 Does anyone have this habit on their computer where they open submissions in separate tabs so that their content can load in parallel? Although Dank is not a web-browser with full-fledged support for tabs, it still let’s you do something similar by opening submissions in screens that appear separately in Android’s recent-apps.

Update: Turns out this feature isn’t very obvious to use and so I’m going to keep it disabled until I’ve found a better way to introduce it to new users. 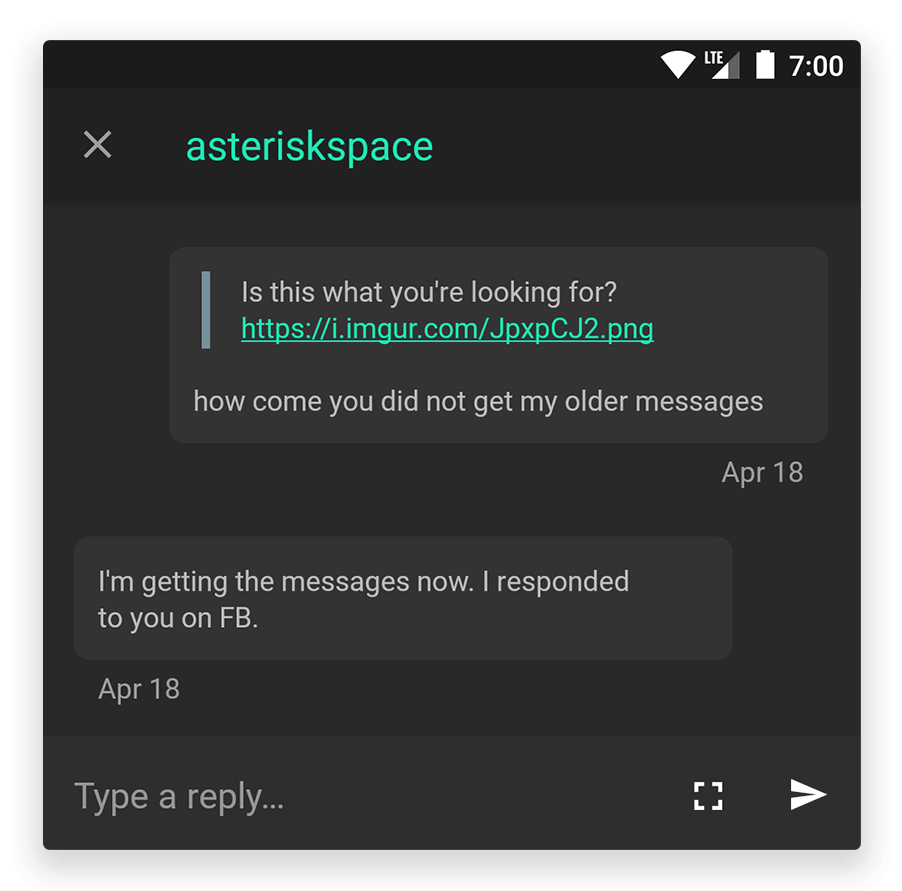 Dank displays message threads as… threads. I don’t get it why other Reddit apps display each message in a new screen. They remind me of messaging in the Nokia era. 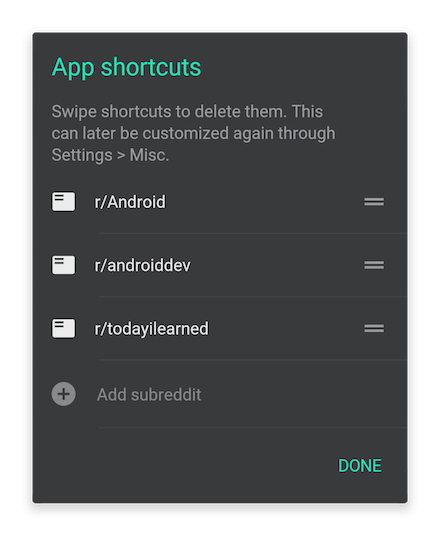 On Android Nougat and above, you can jump to your favorite subreddits directly by long-pressing Dank’s launcher icon. Considering that we usually have fixed favorites, Dank does let’s you set them yourself instead of applying machine learning and ordering them by your visit frequency. 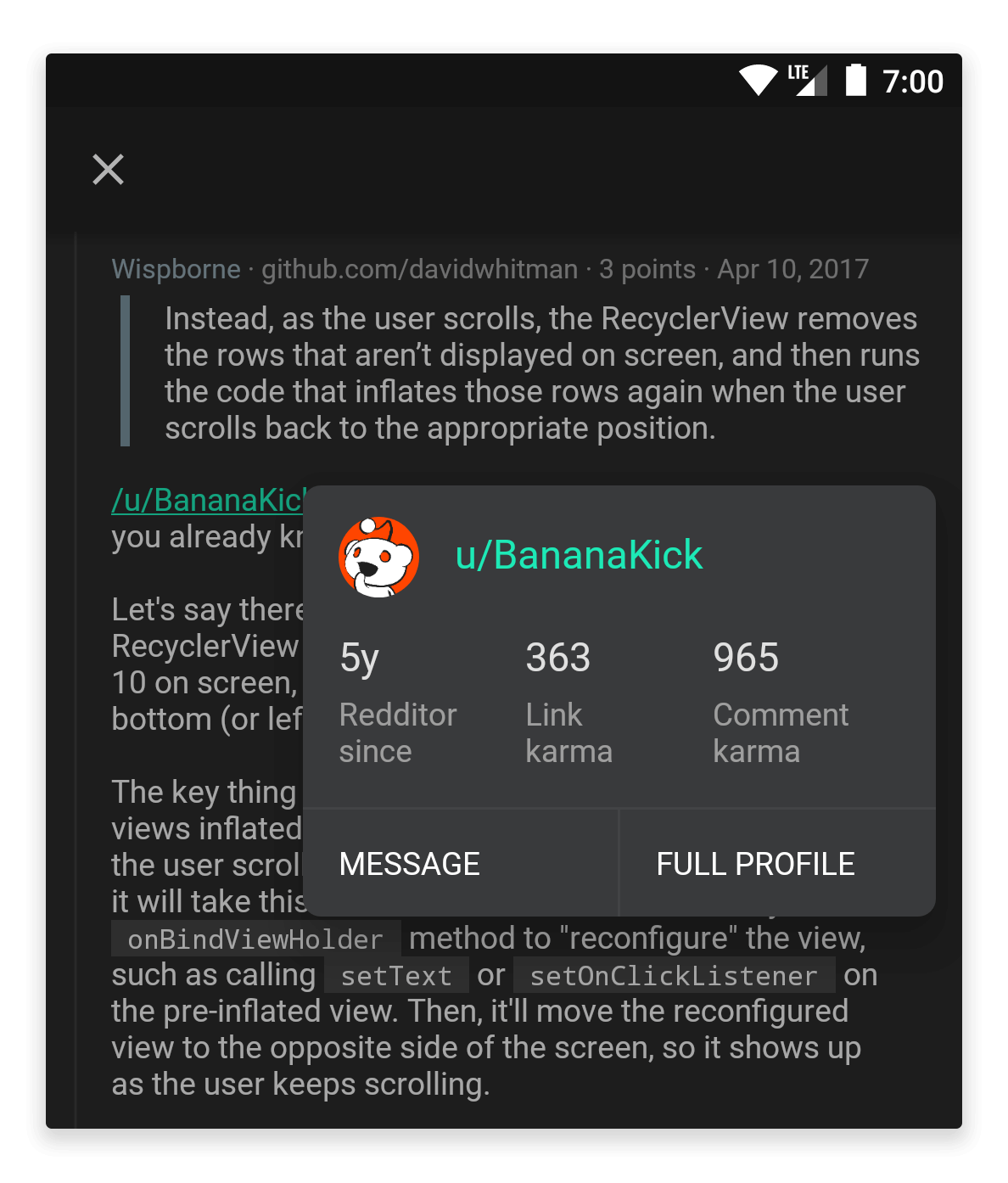 Profiles of fellow redditors can be looked up without switching context. A good usecase where this can be useful is when you quickly check the age or karma of a Reddit account. 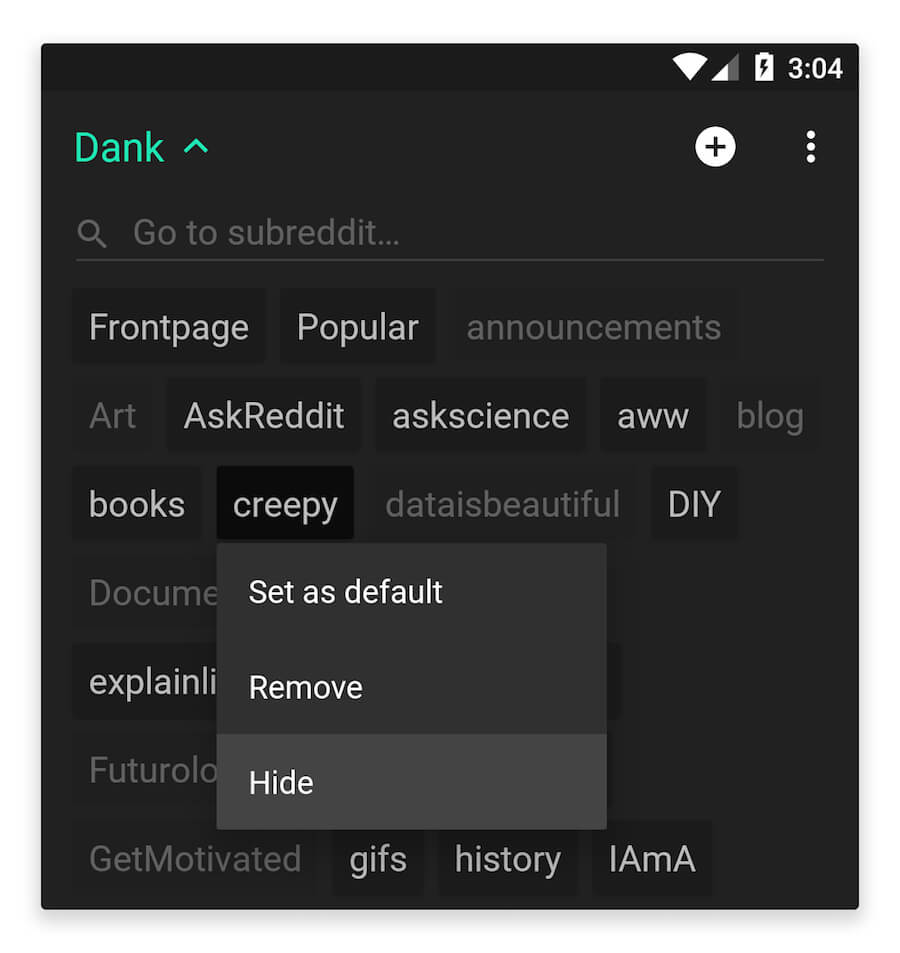 We all have subreddits that we rarely visit but like seeing their posts on the front page. Dank lets you hide them from the subreddit picker so that they don’t clutter the screen.

I’m going to start with a small pool of beta testers (~2000) so that I can fix any low-hanging bugs before I open the flood gates.

If you’re interested in trying out Dank, please understand that while Dank v1 is usable for consuming content on Reddit, there’s still a lot left to be done. A major portion of my time for v1 was spent on getting the user experience ready. Now that I’m fairly satisfied by how it’s shaping up, v2 will entirely focus on reaching feature parity with Reddit. Here’s a list of what’s missing in v1: 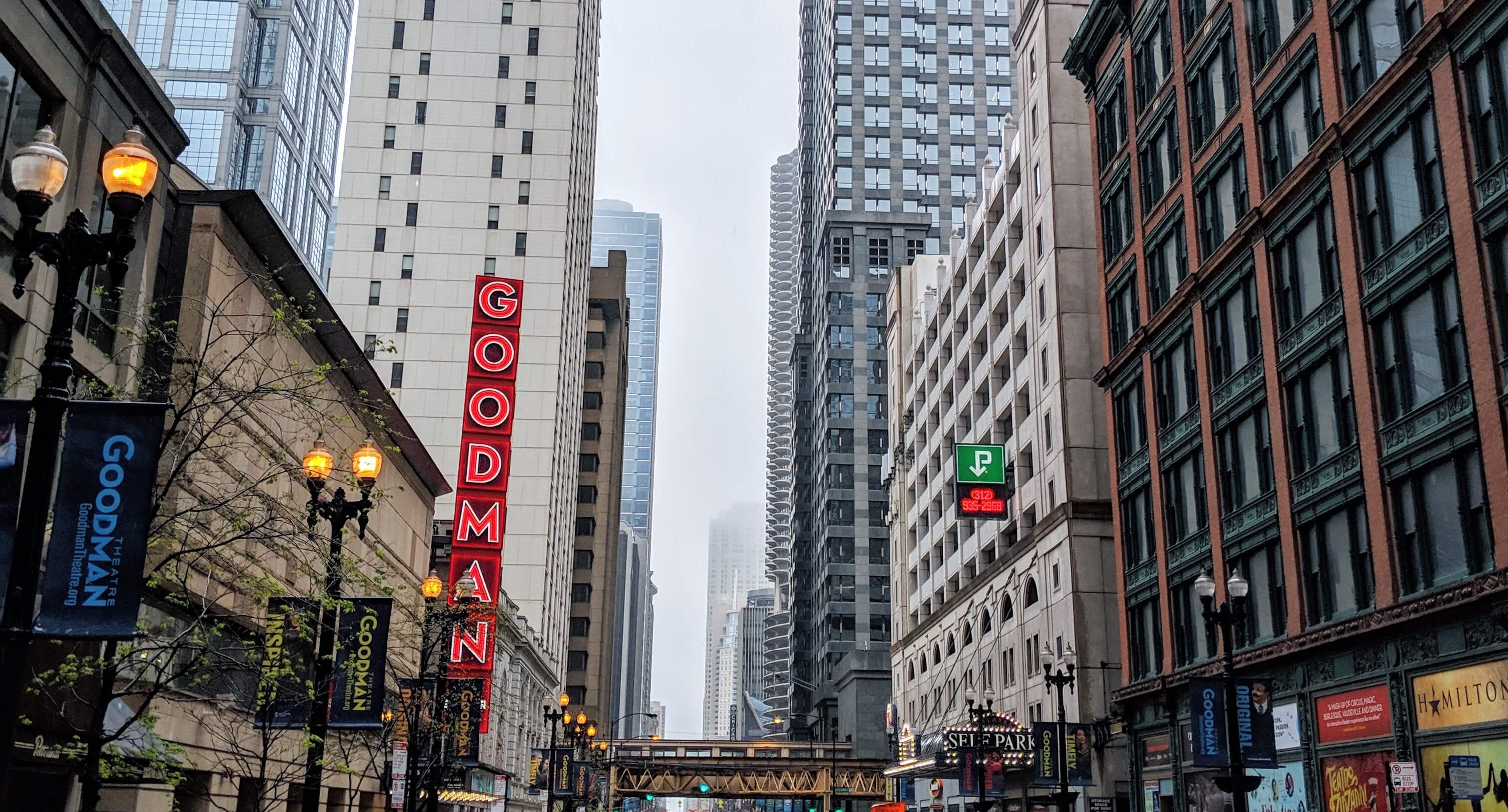